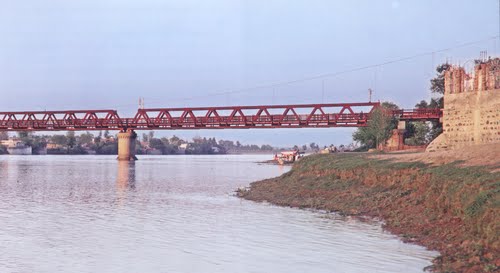 Sur Pul – Pukhto for Red Bridge – connects Nowshera Cantt to Nowshera village in the Khyber Pakhtunkhwa province of Pakistan. It was colored red as most iron structures of the time were. The name Sur Pul stuck and it’s still called Sur Pul though it’s also called the railway bridge. I wonder if the people building the bridge could ever have imagined that it would remain in operation more than a 100 years later.

Sur Pul Nowshera was opened on December 1, 1903 primarily as a railway bridge on the Kabul River and enabled the railway line to extend from Nowshera junction to Risalpur and onward to Mardan. It was also open to both light and heavy vehicular traffic though in those times there weren’t many automobiles in the area. The sides of Sur Pul were reserved for pedestrians.

When a train was approaching, road traffic was halted and caused long backups. Being primarily a railway bridge, the road was only one lane and traffic could flow one way at a time. Signalmen at both ends would control the flow of traffic with their red and green flags.

Downstream of Sur Pul, hugging the river was the Nowshera Golf Club – still very much in operation.

As kids, we lived in Nowshera and would go by school bus daily to Presentation Convent Risalpur. We had to cross the bridge twice a day. Decades later, I still think of Sur Pul as an integral part of my life.

During Eid, between the Sur Pul and the boat bridge, there used to be an Eid Mela / fair. My father would take us by tanga to the fair. We would spend the better part of the day on the rides or watching the madari (magician) do his tricks, watch short films on what used to be called bioscope and buy toys. When we had our fill, my father would buy chapli kabab and then we would rent a boat that would take us downstream to the Company Bagh area where we lived.

Assalam Alaikum. So nice of you to visit KhyberBazaar.com. Our little website aims to introduce you to Pakistani Clothing / Apparel. If you are looking for unique and unusual gifts for men and women, our products would make an excellent choice. From Peshawari Chappal, to Pashmina Shawls, Khes and Dari to prayer mats / Janamaz. With your support we hope to increase our inventory and serve you even better. If you have suggestions, feel free to use the contact form. We'd love to hear from you. Thank You - Khuda Hafiz.